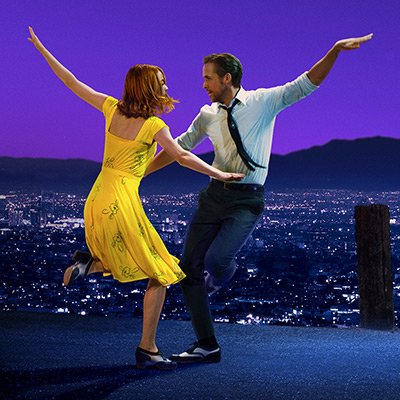 Stepping forwards into the global uncertainties of 2017 the world could certainly do with some light. The Hollywood Dream Factory has always excelled at manufacturing escapism of an exceptionally shiny variety. For many people “forget your troubles c’mon get happy” is what Film, particularly the Musical genre are all about. I too love an entertaining dose of dazzlement and optimistic sparkle, magnificently choreographed chorus lines, staged spectacle, toe tapping show tunes and lavish couture that momentarily convinces me that the only way all stories should end is happily. Watching The Wizard of Oz, 42nd Street, Top Hat or You Were Never Lovelier never fails to make me leave the cinema grinning from ear to ear, inwardly dancing down the street and humming melodies for days afterwards. Film musicals of the 1930’s and 40’s are an escape to a more innocent time that temporarily make me forget the world outside the cinema, entering into a kind of romanticised La La Land. Classic Hollywood musicals of the 1950’s like Singin in the Rain, Guys and Dolls or An American in Paris deliver cinematic song and dance in an understandably buoyant post war mood of technicolour brightness. Who wouldn’t be swept away by the sublime grace and athleticism of Gene Kelly dancing with every fibre of his being, or revel in the anticipation of Brando crooning “Luck be Lady” while rolling the dice? Golden Age Hollywood is full of uplifting musical distractions, Romantic, comic and delightfully entertaining. As much as I love them there is a different kind of musical I love even more. The raw energy of West Side Story that still packs a timeless punch, the poignancy and biting satire of Cabaret, the guts, vulnerability and human substance of Les Miserables or the profound truth about living a creative life that is Stephen Sondheim’s masterpiece Sunday in the Park with George.

You Were Never Lovelier (1942) starring Rita Hayworth and Fred Astaire.

My love of musicals sits somewhere between staged theatrical spectacle and intimate cinematic close up. Similarly my highest expectation in watching a musical on stage or screen is grounded magic, the kind of creative vision that acknowledges the great undertow of life’s losses, doubts and regrets and chooses to dance on regardless, because at base (and in the words of Little Orphan Annie) we have to believe that “the sun will come out tomorrow” and live in hope. Following five star reviews, widespread critical acclaim, a record  seven Golden Globe Awards, 14 Academy Award nominations and 11 BAFTA nominations, the buzz around Damien Chazelle’s La la Land as the new musical for the 21st Century has been steadily building. Those accolades are well deserved. La la land is not simply a case of the Dream Factory narcissistically slapping itself on the back. Like The Artist, which captured the imagination of audiences in returning to the pure wellspring of Silent Era invention and storytelling, La La Land also holds up a mirror to Hollywood. Beneath their highly polished surfaces both films subtlety illuminate the industry; “That’s LA. They worship everything and they value nothing.” La La Land like The Artist is a love letter to the medium of Film, responding to the Zeitgeist of our digital, celebrity laden world, not just by tipping its hat nostalgically at films of the past in remembrance of a bygone era, but bringing that love, passion and understanding of Craft to bear in creating new work.

The sun drenched Cinemascope of La La land isn’t just sentimental Retro or optical gimmickry but imaginative reinvention, shooting in 35mm with custom lenses  because in the context of a story about living your dreams, the medium captures and transmits light in a way that digital never could. The richness of colour, light and performance is immediate, not generated or obscured by unconvincing additive layers of post-production. From the opening number “Another day of Sun”, where the camera roams through an LA traffic jam among the singing dancers with the same free floating emotive rhythm of possibility, Swedish Director of Photography Linus Sandgren (American Hustle, Joy) creates a feeling of seamless naturalism. To achieve this in a genre where the artificiality of bursting into song is often cinematically magnified is quite a feat, but here the visuals, music and movement create unexpected continuity, immersion and brilliance. The heightened palette of colour feels real, because it is aligned with the emotional core of the film and the aspirational nature of its characters. Justin Hurwitz’s score shifts effortlessly between and strikingly beneath exuberant joy and introspective melancholy. Similarly Mandy Moore’s choreography moves through the staged environment with unassuming ease, chiming perfectly with the emotional core of scenes like Mia (Emma Stone) and Sebastian’s’(Ryan Gosling) beautifully understated Pas de Deux. Whilst there’s energy in abundance this isn’t aimed at putting on a show but revealing what lies at the heart of the story.  Key moments of emotional recognition are significantly slowed down and quietly contemplative in keeping with the tone and rhythm of the whole production. 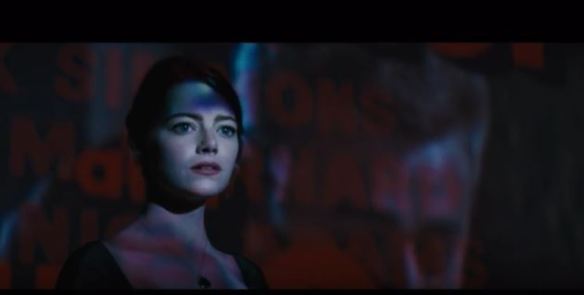 Above all Chazelle’s vision is a homage to artists of all disciplines- “the fools who dream” in creating the Art of Cinema. The irrepressible spirit of this idea is expressed by Emma Stone in an audition scene where the direction within the story is to improvise, the actress performing to camera with background piano accompaniment in real time. Like Tom Hooper’s approach to Les Miserables the close up is used to wonderful, immersive effect to the point where we forget that lines are being sung rather than said. In an earlier audition Mia is acting her heart out, inhabiting the character she’s playing to a gallery of total indifference, being halted mid flow because someone wants to do a lunch order. The camera and the viewer’s investment in the scene is inches away from her face and our hearts sink with hers at the lack of respect for her efforts. It’s the one woman show that nobody’s watching. The shared experience for the audience in that moment is of rejection in spite of giving your all to something, followed by the potentially overwhelming doubt that “maybe I’m just not good enough.” We’ve all been there.

In the Griffith Park Observatory scene, an original setting for James Dean’s  Rebel Without a Cause, the viewer’s disbelief is suspended by the feeling of stepping onto a cloud and dancing among the stars because that’s exactly what falling in love feels like, unreal in the best possible way. Whilst historic film references are peppered throughout, there’s something else at work here in gaining the inspiration of the past. “Vintage”, “Retro” and “Analogue” are all around us today, adopted as marketing terms, but the fascination with the pre-digital past reflects an increasing demand for basic connections human beings can’t live without, things we can actually touch. Chazelle’s La la Land is all about that grounded sense of reality, reaching out for something in the form of waking dreams.

Although there’s familiarity in the central love story; boy meets girl and the Hollywood sunset is wasted on them as they declare their dislike for each other, there are refreshing twists in how the relationship develops. In seeing each other for who they truly are they can let go of the illusionary trappings of Romance. Within the sunshine “Someone in the crowd” could be the one who “takes you where you want to go” there is a deeper level of resonance in the universal desire to be loved. Creatively love is what brings Art to life and La la Land is all about that integrity and vital purism. Innovation is founded on understanding the traditions of your chosen discipline so that you can push them further in making new work-without knowledge of the alphabet and grammar you can’t create any kind of poetry. Sebastian’s love of unadulterated Jazz means he’ll probably never play stadiums but the music has its own life and for him it’s the only meaningful life there is. I love the fact that the film’s director loves the medium enough to create the same kind of Art and a cinematic statement all of his own in the process.

In Whiplash Chazelle gave us the darker side of being artistically driven in the musical power play between teacher and student. La La land might seem like its charmingly bright polar opposite, but along with the uplifting joy of this film there’s also sadness at the core of it. It’s in the old Rialto Cinema we see has closed down through Mia’s car window, in Sebastian’s stripped back piano solo, in the mural of fading Hollywood stars outside the bar where Sebastian plays and in the equality of saving each other’s dreams coupled with the reality of having to walk away. There are sequences that very tellingly blur the line between what is real and what we yearn for; the life we might have led, the choices we might have made and still have been true to ourselves. In many ways the film’s perfect ending feels more real than the one we might have expected based on Romantic  mainstream conventions.

There are blissfully funny moments too- anyone who grew up with the synth pop of a Flock of Seagulls in the 1980’s will love the pool side party sequence. Generation X’s and younger will also relate to an inherited world of uncertainty and the tarnished dream of opportunity that defines the so called developed world. In La La Land taking a risk, being yourself and following your dreams is rewarded, but not without personal cost. Nevertheless the film is an affirmation of creativity behind, in front and beyond the camera. La La Land is more than just a fleetingly sunny day in film land. It’s a movie that isn’t afraid to have one foot on the ground and step onto a cloud simultaneously and in the crazy world we’re living in, that’s a blessing.