The Unbearable Brightness of Being– James Newton Adams. 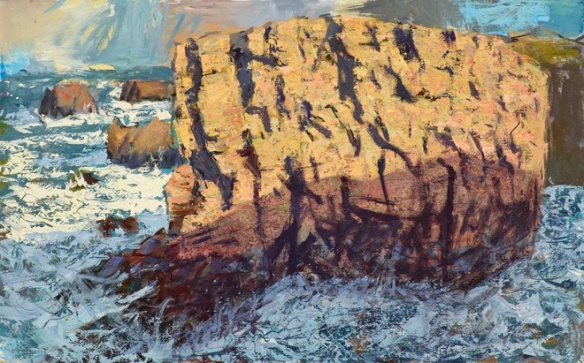 Rock of Ages by Allan MacDonald (Oil on canvas).

Allan MacDonald’s breath taking seascapes reveal why he is regarded as one of the UK’s most respected and accomplished landscape artists. The beauty of MacDonald’s Art lies in its sheer physicality and meditative insight. His is an Art of going out to face the elements in all weathers, in driven pursuit of moments of understanding and connection. This essential honesty is directly translated into the artist’s handling of paint and transcendental palette. Light in every sense of the word permeates even his darkest and most turbulent paintings. There is always an eternal flash of optimistic blue and warm, resilient tones of underpainting emerging beneath immovable mountains or the steely gravitas of Northern Scottish skies. I’ve been following and writing about this artist’s work for over a decade now and his paintings never fail to astonish and inspire me. MacDonald’s unfaltering sense of the sublime in Nature and our human capacity for renewal through the creative Divine are at the heart of his work.

In Moonrise Strathy (Oil on board) large bold strokes and density from impasto, seeing clear to the ground fills the image with a palpable sense of energy and vigour. The half-moon and raging tide anchor the composition to natural cycles, confidently bordering on abstraction. In Northern Outpost (Oil on board) a glow of golden light breaks above the headland, shimmering over the water and into the viewer’s foreground. Loaded and incised marks down to the board convey the lashing sea in rich, vibrant green and blue, balanced with the warmth of lemon, ochre and cadmium yellow. In this ever changing furore, light is a constant source of illumination and a dominant presence; within the painting, the soul of the artist and the eye/mind of the spectator. In Rock of Ages (Oil on canvas) clefts of shadow delivered in bold, singular strokes and the dramatic sweep of light across the monumental rock face create a feeling of earth bound resilience and transformative wonder. Here lies the true lineage of Northern Romanticism, based on pure experience and communion with Nature, where human scale assumes, in cosmic proportion, its rightful humility. 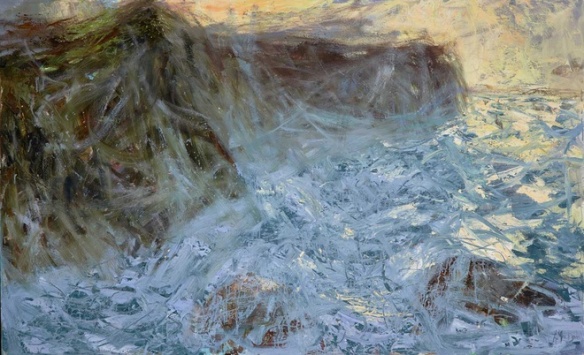 The Ravages of Time by Allan MacDonald (Oil on Canvas). 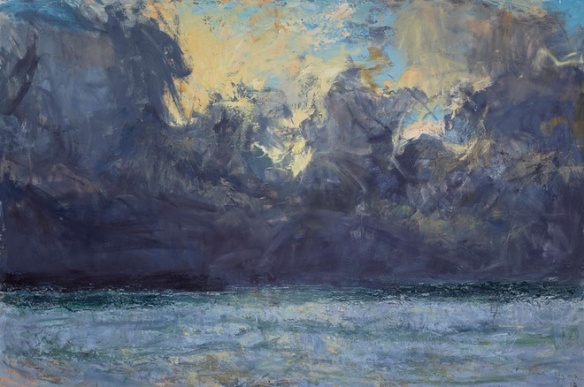 Crescendo by Allan MacDonald (Oil on board).

Appropriately hung on the far end wall of Kilmorack Gallery, in the space where the church altar would have been, are a trinity of large scale paintings, each one inspirational in its own aspect. To the right, The Ravages of Time (Oil on canvas), depicting sea cliffs shrouded in ocean spray and turbulent mist, conveying a sense of vulnerability in the fluid tracery of marks cascading over rocks into the ancient depth of the sea. Standing on the shore of a harsh environment, the promise of emerging light prevails. The central painting Crescendo (Oil on board) is a moment of light and hope breaking through the commanding gloom of storm clouds, over the relative calm of the sea. A deep emerald horizon of green and rolling blue anchors the painting in contemplative stillness, while MacDonald’s instinctive and illuminating brush work bring forth a resounding sense of human aspiration. The final painting, The Coming Brightness (Oil on canvas) is a telling surface of built up paint layers, labour which yields a wide semi-circular swathe of light cutting through the sky, reflected in the sea and striking the shore. Thin drips of yellow light and pure white pigment are contrasted by the deep purple and mauve shadow of the sky. It is a moment of realisation borne out of labour, of grappling with paint and the elusive nature of painting itself. In Voice of Many Waters (Oil on canvas) we see an essential trinity of structure, expression and spirit rendered equal. 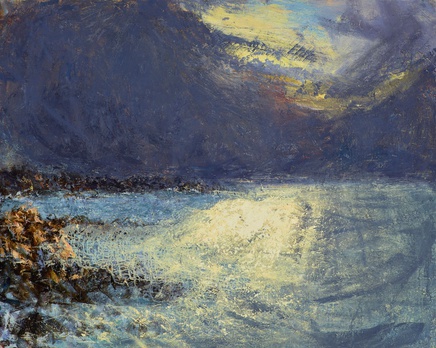 The Coming Brightness by Allan MacDonald (Oil on Canvas).

Shetland based artist Peter Davis’s watercolours on paper deliver another beautifully distilled vision of a human eye and mind perceiving the landscape. In Storm Beach we see a meeting of elements; washes of suspended pigment, merging and overlapping, betwixt and between sky, land and sea, seeping to the edges of the composition. Davis’s masterful tempering of the paper and fluid technique create gathering strengths of water and pigment, like the troughs and ridges of a storm. The artist communicates a profound understanding of his environment and his chosen medium in landscapes that hold the imagination in deepening gradations of colour and heightened awareness. Lambi Loch (Watercolour on Paper) is a beautiful example, the landscape reduced to a Zen-like bowl of intensifying blue. In Loch at Westerwick the pure white paper of the foreground, anchored by a dark solid stone at the edge of the water grounds the viewer, while reflective light both sides of the horizon create a burgeoning sense of the infinite. These are quietly adept and exemplary works by an artist breathing new life into the medium of watercolour. 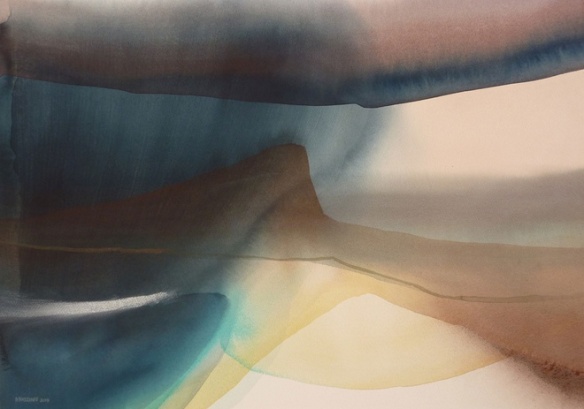 The artist’s experimental approach is refined in Last Day, where the handling of pigment, leeched into stone or the convergence of tidal washes display masterful control. The lone rock is almost figurative and emotive in its associations; it’s a landscape of loneliness that extends into the distance and the high set, weighted horizon. Davis’s work speaks of being still and resoundingly present, both for the artist in terms of creative process and the viewer in seeing/contemplating his work. Davis’s palette is naturally subtle and finely nuanced, allowing space for each physical element within the picture plane; white paper, water and pigment to be mindfully observed, creating a space for the intellect and the imagination to dive into. 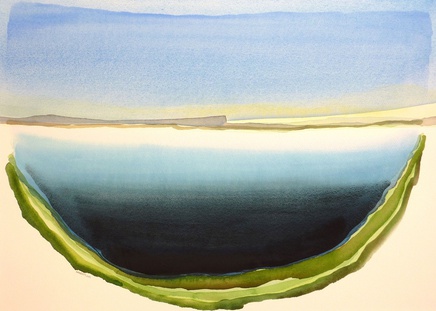 The acrylic on canvas paintings and mild steel sculptures of James Newton Adams are naively drawn, often humorous and insightful observations of humanity. The artist’s use of stark black and white with expressionistic accents of colour captures everyday life with refreshing economy and joie de vivre. Safety in Numbers exhibits a characteristic bird’s eye view, with the title referring equally to the school of fish or the human dwellings compressed into two coastal headlands, boats and buoys bobbing on the water like toys. Human figures in paintings such as The School Run, Market Day and Am Prabam are deceptively simple; however the posture of gestural marks conveys the attitude and the emotional state of each individual in the crowd, suggesting the nature of their interactions and relationships with others. The sense of close observation within small rural communities, dependent on the land and sea, is heightened in Adams’ painting The Fisherman’s Breakfast with its angular collection of figures; world weary, neurotic, hardened and inherently comic. 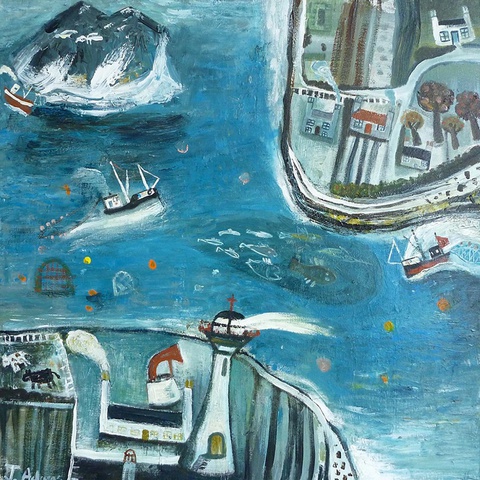 Safety in Numbers by James Newton Adams (Acrylic on canvas). 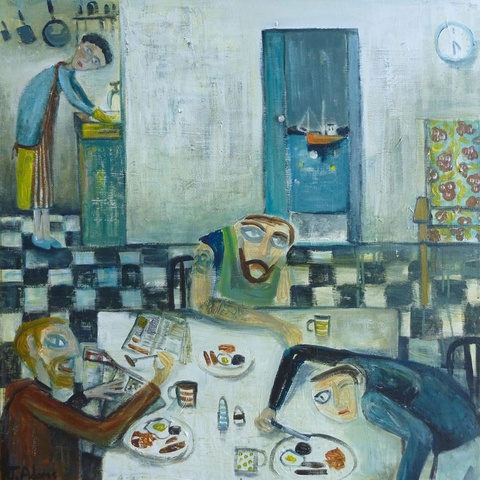 The Fisherman’s Breakfast by James Newton Adams (Acrylic on canvas).

You Can’t Teach an Old Dog New Tricks defies the saying in the uncharacteristically open space the lone figure inhabits. You can’t help but smile as a grown bearded man flies a red kite whilst a small dog looks quizzically on from the edge of the composition! In spite of works like Fisher Boy which skate dangerously close to John Bellany’s raw and sombre vision of village life, Adams holds to his own vision- one which is infused with essential humour in the face of life’s harsher truths. There are also moments of the pure whimsy; in The Butter Dish with a dog eyeing the prize on the kitchen table whilst his elderly owner obliviously washes her dishes, or in the vibrancy and gentility of Open Garden. Adams’ elongated figurative sculptures such as Barrow Boy or Better Together are also infused with precariously poised humour and knowing, in the balance of form and in the relationship between a man and woman holding hands, one following behind the other. 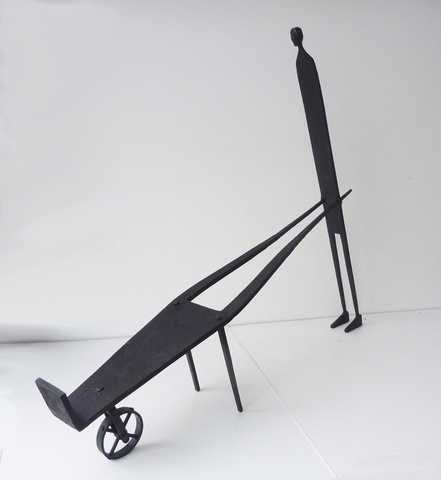 Each artist is well represented and it is a pleasure to move between them in the exhibition space, giving rise to intense contemplation, avid thought and humorous delight.

All images by kind permission of Kilmorack Gallery.